Hometown Hero: In The Flow Chemmy Jones Honored with Awards 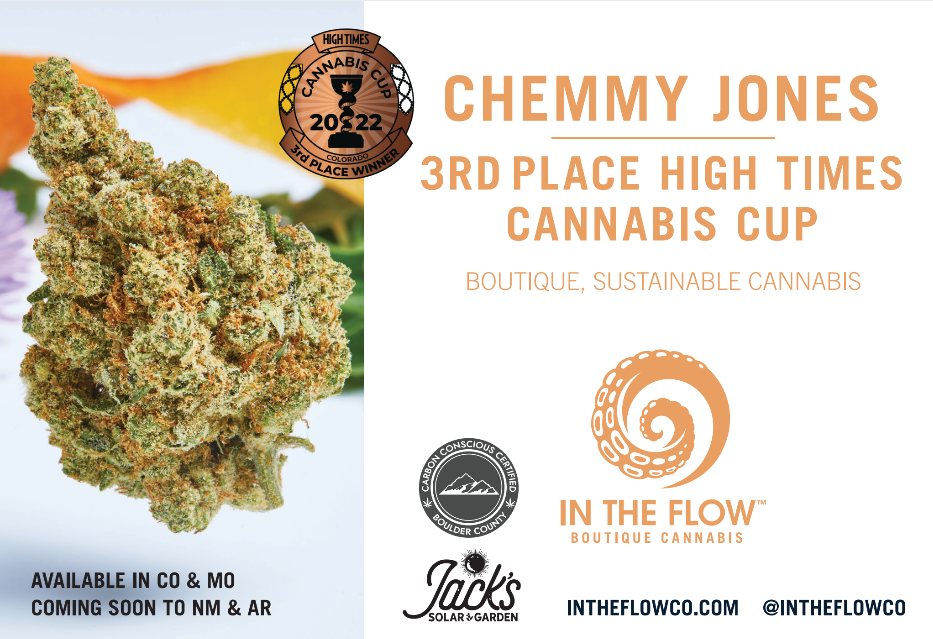 Here at In The Flow, Chemmy Jones has become our signature strain! Why? Just like all of our premium cannabis strains, we give Chemmy Jones the nutrients & nurturing it needs, curating its visual appeal, enticing aroma, and robust effects to the utmost of our abilities.

All of our boutique, sustainable cannabis is fantastic, but there’s something about CJ that keeps it rising to the top. What’s special about Chemmy Jones? Read on to learn more about our golden child.

Chemmy Jones has become a popular weed strain– especially our Chemmy Jones at In The Flow! We are so proud to be winning awards for our premium Chemmy Jones year after year. You may be wondering about the genetics of Chemmy Jones. Is it an indica or sativa? What are its effects? What terpenes are in Chemmy Jones? All great questions– let’s dive into those answers and more!

Chemmy Jones is a hybrid strain that was bred from two powerhouses– Chemdawg D (aka Chemdog) and Casey Jones. Also known as “Chemdog Jones” or “Chem Jones,” this strain has the pungent diesel smell of Chemdawg, balanced by Casey Jones’ floral notes.

What does Chemmy Jones look like? Typically the plant has bright green leaves while the buds are a dark olive to forest green with a thick white dusting of trichome resin. Wiry orange hairs are seen throughout Chemmy Jones’ thick, dense flowers.

Is Chemmy Jones an Indica or a Sativa?

Chemmy Jones’ parent plants Chemdawg and Casey Jones come from mixed lineage. While Casey Jones is a sativa strain, Chemdawg is an indica/sativa hybrid. This makes Chemmy Jones a hybrid as well, but with ¾ sativa roots, it presents with strong sativa characteristics. It is a sativa-dominant hybrid.

What Terpenes are in Chemmy Jones?

Chemmy Jones announces itself from afar with a distinctive stank! Many folks say the prominent smell of Chemmy Jones is a chemical/diesel fragrance that some liken to the smell of moth balls, hence the moniker “Grandma’s Closet.”  But, diesel isn’t the only aroma.  There are tropical and sweet undertones that round out this profile. What terpenes create this enticing bouquet?

The most dominant terpenes in Colorado-grown Chemmy Jones are myrcene, β-caryophyllene,  linalool, limonene, and α-pinene. Let’s learn more about these effect-boosting essential oils.

Myrcene is the most prominent terpene in most strains of cannabis, and the number one terp in Chemmy Jones as well (at least in CO! Different regions may produce slightly different terpene dominance). Also present in hops, myrcene gives beer its strong scent. Myrcene is also a dominant terpene in mango, lemongrass, and thyme. Myrcene may have calming, muscle relaxing effects. Many folks claim (and animal studies suggest) that myrcene has pain-relieving and anti-inflammatory properties.

Beta-caryophyllene (β-caryophyllene), commonly known as caryophyllene, is Chemmy Jones’ number two terp. Caryophyllene is the only terpene that also acts as a cannabinoid! This means that caryophyllene can interact directly with your endocannabinoid system’s CB1 and CB2 receptors, providing anti-inflammatory benefits. Caryophyllene has a spicy aroma and is also a prominent terpene in black pepper, cinnamon, and cloves.

Linalool is the terpene that gives lavender and chamomile their soothing, floral scents. Due to its relaxing and antimicrobial properties, linalool is often used in cleaning products, skin care, and cosmetics. Linalool may help ease anxiety and inflammation.

As its name suggests, limonene has a powerful citrus fragrance and is the dominant terpene in lemons, limes, and oranges. Its fresh aroma and antibacterial properties make it a common ingredient in cleaning formulas. Limonene’s invigorating smell and chemical properties may help elevate your mood, relieve stress, and aid in digestion.

Pinene is the commonly used name for alpha-pinene (α-pinene). As you might suspect, sniffing pinene smells like walking in an evergreen forest. Pinene is a common terpene in pine needles of course, as well as rosemary, dill, and basil. Pinene’s benefits are said to include pain and anxiety relief. Pinene may also be an anti-inflammatory and a bronchodilator (it opens your airways).

Chemmy’s hybrid genetics and extensive terpene profile give it the best of both worlds. Users report that Chemmy Jones helps relieve their pain and relax their muscles, while easing anxious thoughts.

But this soothing body high also comes with invigorating energy and productive creativity, for most users. The majority of Leafly users describe Chemmy Jones’ high as invigorating and energetic. Find In The Flow on Leafly HERE.

Fans of Chemmy Jones say that it is the best strain for their depression, anxiety, pain, inflammation, and digestive issues.  It’s also a winner for stoking inner creativity.

A little bit of Chemmy will take you far, as it has a high THC concentration of 28+%, with some batches testing up to 35%! Too much Chemmy can cause paranoia, especially for new users.

Chemmy Jones receives rave reviews from everyone who tries it, but its reported effects vary depending on the user. While most Chemmy Jones’ reviews (like this one from Leafly) rate it as a long-lasting, functional, and revitalizing high, others find it to be so stoney that it turns them into a “drooling buffoon,” like this Westword reviewer.

So while most Chemmy Jones aficionados love it as a wake & bake strain that keeps them energized for hours, that may not be the case for you. If it is your first time trying Chemmy Jones, make sure to sample it on a day that you can lock into the couch if necessary.

In The Flow’s Chemmy Jones has been rated as one of High Times’ best weed strains, taking home 3rd place: Sativa Flower Category in the 2022 Colorado Cannabis Cup: People’s Choice Edition. Keep your eye out for our featured ad in the December issue of High Times!

Past honors for In The Flow’s Chemmy Jones strain include:

Chemmy Jones Where to Buy

In The Flow’s award-winning Chemmy Jones can be found right in our hometown of Boulder at the following dispensaries (statewide in CO- Find your closest dispensary here):

In The Flow’s Chemmy Jones is also available now in Missouri and coming in early 2023 to Arkansas through In The Flow’s partnership with The Source Cannabis.  In The Flow works exclusively with The Source to provide the quality strains you love at The Source dispensary Missouri locations—Lake Saint Louis, Raymore, and West Plains—as well as their location in Northwest Arkansas.

If you are looking for a potent, powerful whole-body high that will soothe your stress and anxiety while also boosting your energy and creativity, Chemmy Jones is your guy. And no one does Chemmy Jones better than In The Flow. Get your Chemmy Jones today!

View All Posts
Do you have a question? Contact us now!

Thank you! Your submission has been received!
Oops! Something went wrong while submitting the form.